Born outside of the personal care industry.

When we founded Akamai in 2016, we didn’t start it to make a quick buck. We saw a problem in the area of personal care products (loaded with toxic chemicals, high costs, too much complexity/not enough health, and a lot of myths/bad advice), and we were inspired to show a better way. Something better for our health, wallets, and the planet. We are driven to share with you what we learn along with the essential tools we use in our lives. Think of us as torch bearers.

So who are we? A few quick data points... 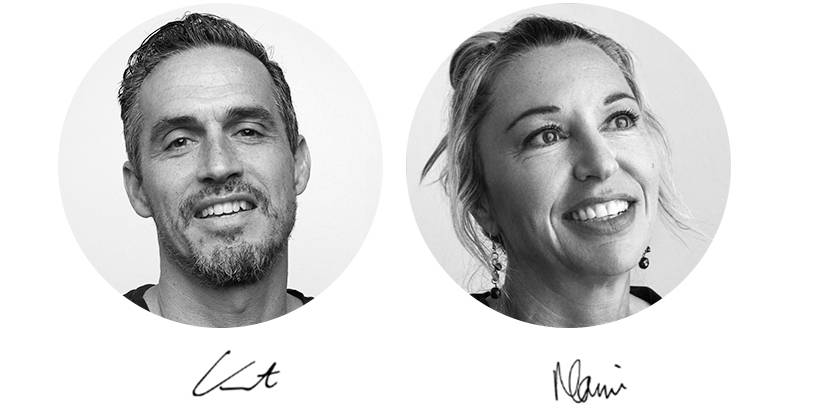 Want to get to know us better? Click here for our “Tim Ferris style” interview...

As a serial social entrepreneur, he’s used to making a difference and changing the status quo. On the front of the green wave, he started the company reusablebags.com in 2003 (later rebranded reuseit.com) and raised consumer awareness about the problems with use-and-toss items like plastic bags and bottles. His vision was to use simple lifestyle changes to help save the environment, save money and waste less. By 2013, reuseit.com had grown to 300,000 customers, empowering them to eliminate an estimated 1.1 billion use-and-toss items. Reuseit.com was twice voted as Green America’s Green Business of the Year (and was granted their Lifetime Achievement Award).

After a course in organic chemistry weeded him out of earning his degree in Microbiology, he discovered Philosophy where he found a home of study. He continues to be profoundly influenced by a convergence of Stoicism, Rationalism, Empiricism, Epistemology, and Ethics — and while at university, cited The Structure of Scientific Revolutions by Thomas Kuhn and sentential calculus (aka propositional logic) as two key game-changers.

In addition to serving Akamai’s mission, he spends time trail running, being in nature, and being a father.

As a tireless researcher and problem solver, Marni's passion for well-being blossomed 18 years ago when she became a mother. Her sense of purpose aligned and grew after she discovered the Weston A Price Foundation (a non-profit dedicated to traditional, nutrient-dense whole foods and healing arts), the discovery of Rudolph Steiner (founder of Anthroposophy), and the Waldorf education system — she co-founded the Urban Prairie Waldorf School in Chicago.

In addition to working on Akamai, Marni focuses on raising their high school children and recharges by painting, making jewelry and hiking with with Xoxo, their family dog.

I've really made a point to reduce my toxic load after reversing my autoimmune and chronic illness symptoms, and making sure my oral care products are as natural and effective as possible is a huge part of that. Not only is this brand dedicated to quality, it's also really effective. My tooth sensitivity had significantly decreased in just ONE WEEK! I will never go back to pastes with questionable ingredients ever again. There's simply no need with a brand like Akamai around. Everyone needs to know about this stuff!

I will never use toothpaste again! Akamai tooth powder is the BEST!!!

I am 66 years old . I am using the 3 in 1 bar in the shower to wash my body and my hair. I love that I can use one product for everything. I was worried at first about using it on my hair, but it is working out really good. I thought I would not be able to brush my hair out without conditioning it first but it brushes out pretty easy. Then I add the skin fuel to my fingertips and rub it into my scalp and brush it through my hair. I love these two products together. My hair is not frizzy anymore and is more manageable and shiny. I am using less hairspray because my frizziness is not flying all over the place! I’m so glad I found this company. Keeping it simple.

Writing a follow-up to my original review on the mineral toothpowder. After finding a biological dentist to do just repair work (no general cleaning), I finally went in for a cleaning after many years of no dentistry other than the repairs. I impress that it had been YEARS (5-6) since a cleaning. My dentist said I had a "little" plaque, but the whole time cleaning he kept shaking his head and saying..."I can't believe how clean your teeth are...you're teeth are so clean...amazing how clean you're teeth are." That is a testament to how well mineral toothpowder works! I floss inconsistently with the black floss, so I conclude it is the toothpowder doing the main work. Love, love, love it!!! ps. hoping next cleaning I get a discount for "lack of work on the dentist's part"! ha! lol! =)

This is my first time using Akamai Skin Fuel and I am thrilled with what it does to my skin. At 68 yrs. old my skin has been abused by the elements for years. Skin fuel leaves my skin feeling nourished and smooth. I LOVE it!!

SKIN FUEL
This stuff is a game changer!

It took a bit to get used to but now I won't use anything else! The best part is the continued clean bills of health from my dentist!!

MINERAL TOOTHPOWDER REFILLS
The search is over

I have looked high and low for many years for an all natural mineralizing toothpaste without sweeteners or overpowering (if any) flavors. My ideal toothpaste would have no taste at all and I have something I can use for that, but my dentist recommended Fluoride for mineralization. NOT. Happily I found the Akamai mineral toothpaste and it is quite pleasant tasting, refreshing, and teeth whitening to boot. I actually enjoy brushing now. The little jar would last me the rest of my life, it seems.

I’ve been using Akamai products daily for the past four years.

Love and highly recommend them.

I am starting to see more Fulvic mineral complex’s out there.
I buy from Akamai because I know the owners, trust their ability to research, their extensive knowledge regarding health and how conciseness they are for the well-being of this planet and the people on it.🙏

I have been using Akamai Tooth Powder for a few years and every visit to the dentist has been perfect ! I highly recommend it !

It’s fantastic!! My skin loves it!! Finally found what REALLY WORKS!!
Thank you Thank you !!!
I don’t wear make up at work, only my Black Balm.
Barb Belic. 👏👏👍👍😁

The Akamai Fulvic Mineral Complex strengthens my teeth. Since I started taking it every morning, sensitive spots on my teeth completely went away. I feel like it is benefitting my overall health and well being.

These refills for our mineral toothpowder is an excellent way to reuse and recycle our glass jar.

Love love love it!!
Has done amazing wonders for my skin!!
I’ll be purchasing more soon. SUPER GREAT PRODUCT!!
I won’t use anything but your Skin Fuel Oil.
My skin loves it. Feels and looks fantastic !! I can’t believe I found something that works actually for my whole body. 👏👏👏😁❤️

Hi friends. I am ashamed but also thrilled to say, that it has unfortunately been two years since my last dental cleaning. COVID just made it all so strange! But... here's the best part - I've exclusively used Akamai's toothpowder, black floss, tongue cleaner, oil pulling, the works for the past four years and even after such a long time, my dentist was AMAZED at how clean my teeth were, how healthy my gums were, and the hygenist barely had to use metal to clean my teeth, which always gives me terrible chills. The best part? Two years since cleaning and NO CAVITIES or worries from my dentist whatsoever. Now, I would never recommend going that long without a dental visit, but do love that I got such great results after putting Akamai's products to a true test. Highly, highly recommend each and every piece of this kit! Thank you!

ORAL CARE COMPLETE KIT
I love the 3 in 1 Bar

I love using the 3 in 1 Bar for my shower. I smell CLEAN! Not perfumery….and not stinky still. I just smell clean. 😊 I really like it a lot. Sheryl S. from N.Y. S.

The not so good ingredients found in natural toothpastes
READ MORE