A simple, powerful tool to help you get rid of bad breath. Get at the root cause of bad breath by physically removing the coating of odor-producing bacteria from the back of your tongue. Tongue Cleaner + Brush + Floss + Hydration equals goodbye bad breath.

Orders are shipped Tuesdays and Fridays via USPS from Chicago.

"Great Tongue Cleaner. I love the steel handles on this tongue cleaner. I use it every morning before I brush my teeth. It keeps my breath fresh." — Judy O.
Read more reviews 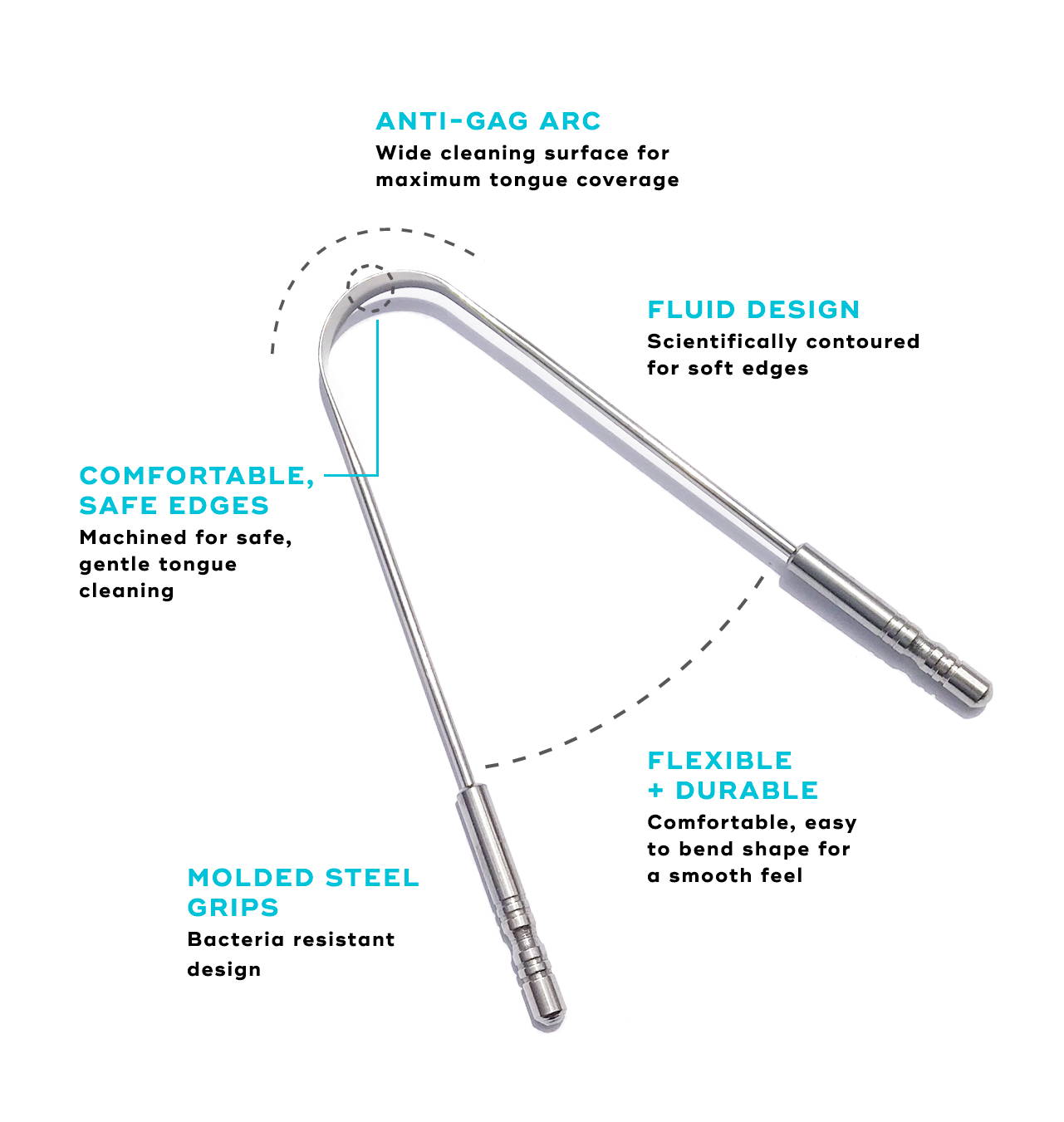 Does your brand check all the boxes?

We stand behind everything we make — investing an enormous amount of time and energy in developing them. If for any reason you are not happy with an item you purchased, you may request a refund or store credit.
Learn more here

I've had other tongue cleaners before. The handle of a plastic one eventually broke and the rubbery handles of another one ended up looking dirty. I like the clean look of this one, that it is made of stainless steel and no plastic!

I gave this as a gift and it was received with a smile.

123
Back to Our Products

Let customers speak for us

Just about finished with my first jar of mineral powder and bottle of oil pulling mouthwash. I am beyond happy with how clean my mouth feels. I just added the floss and tongue scrapper to the mix. 10 out of 10 recommend.

So I have a lot of cavities, every 6 moths or so I’ll have and infection and a tooth would flare up! I was introduced to this product about 4 years ago! NOT A SINGLE FLARE UP! This stuff is an absolute miracle! ♥️🙏

Both are amazing products. I'm going to try the teeth products next!

I had been looking for a mineral toothpowder to start using for quite sometime. After a lot of research I landed on Akamai. I'm so happy with my purchase. It has been several weeks and the sore spot that I have in my gums from grinding my teeth has gone away. My kids are using the mineral powder as well and they instantly commented on how white their teeth look. I've also noticed my teeth are brighter :)

I have suffered with cavities and dental problems for a long time and haven’t been able to find anything to help them until I found Akamai! I haven’t been using it that long and I can say that my gums don’t bleed anymore, it doesn’t hurt when I brush my teeth, and I am currently waiting to see results on my cavities! This is by far my favorite brand of oral care! Thank you Akamai!

The black balm was first given to me as a gift, which is a magical healer. I then started with the tooth powder and floss. Next I tried the fulvic acid which has boosted my daily wellness, and finally the skin fuel which smells amazing, and promotes a healthy facial glow. Pretty soon all I’ll have is Akamai!

Back from my 6 mo dental checkup. Once again my biological dentist's comment "literally, I'm going to have to look for something to clean in here....your teeth are so clean...amazing". I proceeded to mail him the Akamai product brochures of my routine that I told him "makes his life easier". Ha! Thank You Akamai!!! Planning to change to a once-a-year cleaning thanks to you!!

This floss is thicker than we are used to using (Glide) and I am shocked how much more plaque it removes! Everything feels so much cleaner!

It is not cheap, but it is definitely superior to what you can buy in the store.

Finally a product that helps w the health of your teeth. First time I actually see a difference in my smile.

I will never use anything else on my oral care again! Akamai Mineral tooth powder is the best! It has made my teeth sOo white and got rid of all the stains even. Fixed what the dentist couldn’t!

I’ve never tried tooth powder before but after learning about all of the garbage that is stuffed in basically all toothpastes, I knew I had to try the powder! I won’t ever buy toothpaste again. This is a good quality product and I love it

Hi! I just had to let you know - I recently went to the dentist for the first time since 2019 - the pandemic hit and then I just didn't want to go for fear of needing a ton of work, irrational I know. Anyway, I went and the dentist said and I quote "Keep doing what you're doing!" I am using the Mineral Toothpowder and Black Floss, and bamboo toothbrushes and really nothing else. And I admit my work from home routine means I often only brush once a day. Yikes, I know. However, the dentist said he'd seen teeth that need deeper cleaning after 3 months and wanted to know my routine. I was SO relieved that I didn't have any cavities and my gum recession has recovered a little.

Thank you AKAMAI!!!! Your products are amazing and I truly don't know what I would do without them. Now if I have to use typical toothpaste, it tastes disgustingly sweet and leaves a cloying taste for too too long. It's amazing what we get used to over time, meaning that sweetness, that you don't even realize is so intense until you stop!

I was skeptical thinking Akamai would make any difference. I was wrong! I no longer get a “fuzzy” feeling on my teeth and my mouth feels cleaner. I will say I had to mix the powder with organic coconut oil (solid) to make it more “paste” like but also because my teeth became sensitive in spots when I used it alone. I would 💯 recommend this tooth cleaning powder!

I went from Crest to Boka to Akamai and I'm loving the switch! My teeth feel cleaner for longer and the Boka seem to make my teeth sensitive so I made the switch to Akamai. I will be honest the tea tree oil is what I taste the most and took a few days to get used too but knowing how much better it is for me makes all the difference in the world. Very happy!

The not so good ingredients found in natural toothpastes
READ MORE