We believe clean and healthy skin, hair and teeth can be achieved with far fewer products, chemicals and complexity. We’ve taken a radically simplified, back to basics, truly natural approach.

The reality is — the mainstream approach to personal care and grooming isout of control. If you believe the hype, then in order to have clean and healthy teeth, gums, skin and hair you need tons of products - the more you spend the better you will be -  and it’s ok to douse yourself with a wide array of weird sounding synthetic chemicals. In this industry more is more– the more I pay, the better it is, the more I use the better I will be. There is nothing normal about what has become “the norm”.

Ask yourself, is the cumulative burden of all these chemicals we’re absorbing through our skin and mouth worth it? (not to mention the impact on our environment) Does it make sense to follow daily rituals and use products that can wage war on our body’s natural and complex microbiomes? Are we getting healthier skin, teeth and hair in the process? Do we really need to follow daily routines requiring so many products? Enough!

In the face of this, we take an outsider’s approach and show a simpler, healthier, smarter way.

“Akamai’s philosophy is music to the ears of non-toxic beauty advocates and minimalists alike.” — Treehugger

"Make it as simple as possible but no simpler." — Albert Einstein

Our approach is rooted in the following 10 principles:

Born Outside of the Personal Care Industry 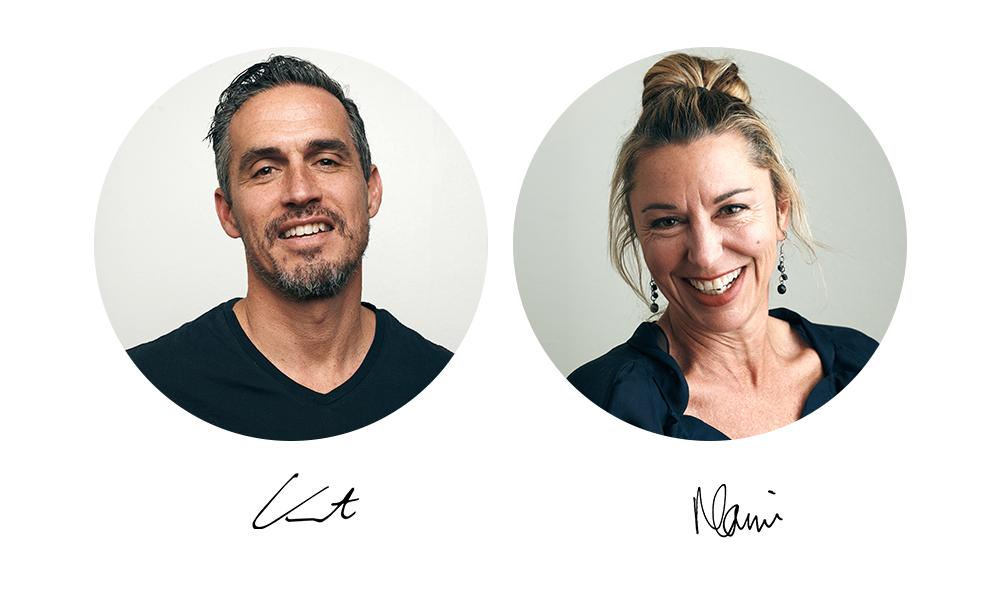 Akamai was founded by husband and wife team, Vincent Cobb and Marni Shymkus, longtime advocates of green and healthy living. Both are freethinkers that are addicted to problem solving and truth-telling, and while it may sound corny, doing good and making the world a better place.

Drawn to helping men and women break free from the Personal Care Industrial Complex, they were inspired to create the highest quality personal care system that is effective, health-focused, reasonably priced and radically simplified. Vince and Marni are inspiring thousands to break free of mainstream personal care by offering a thoughtful alternative.

A serial social entrepreneur, Vincent is used to making a difference and changing the status quo. On the front of the green wave, he started the company reusablebags.com in 2003 (later rebranded reuseit.com), and raised consumer awareness about the problems with use-and-toss items like plastic bags and bottles. His vision was to use simple lifestyle changes to help save the environment, save money and waste less. By 2013, reuseit.com had grown to 300,000 customers, empowering them to eliminate an estimated 1.1 billion use-and-toss items. Reuseit.com was twice voted as Green America’s Green Business of the Year.

After a course in organic chemistry weeded him out of majoring in Microbiology, he discovered Philosophy. He was, and continues to be, profoundly influenced by Stoicism, Rationalism and cites The Structure of Scientific Revolutions by Thomas Kuhn as a game changer for him. When not serving Akamai’s mission, you can find him mind-training, thinking and trail running in his home state of Colorado, as well as spending time with his two children.

Marni has spent 15+ years researching, refining and creating health-focused DIY personal care products that leverage 100% natural ingredients in their whole form. Her goal is to craft products that are simply better than anything else available, while addressing root causes vs symptom management. She’s obsessed with creating powerful, practical, effective and affordable products that harness our body’s ability to heal naturally.

A tireless researcher and problem solver, Marni’s passion for wellbeing blossomed 18 years ago when she became a mother. Her sense of purpose aligned and grew after she discovered the Weston A Price Foundation (a non-profit dedicated to traditional, nutrient-dense whole foods and healing arts), the discovery of Rudolph Steiner (founder of anthroposophy) and Waldorf education system— she co-founded a Waldorf School in Chicago. While not working on Akamai, Marni can be found raising their high-school children, painting, making jewelry or hiking with their family dog Xoxo.

An Ounce of Prevention is Worth a Pound of Cure

We know far too many people who have died of cancer, or who have battled and won, at great cost to themselves and their family. According to the latest research, almost half of men over the age of 55 will get cancer and over one third of women. While a small percentage are genetic, 85% of all cancer is caused by the environment and lifestyle choices. The choices you make every day increase or decrease your chances of having cancer - the products you choose to clean your house, the furnishings and cookware you choose, the personal care products you use to protect you from the sun, moisturize and clean your body, the food and meals you buy and consume, the water you drink, the air you breathe. These choices add up.

While cancer is the greatest concern, more common adverse side effects of toxic chemicals in personal care products include: premature aging of the skin, hormonal dysfunction, dermatitis, psoriasis and immune dysfunction.

Join us and the EWG to spread the word about toxic chemicals in personal care and the push to rethink cancer prevention. Read more at EWG’s website.

Using Business as a Force for Good

Certified BCorp and 1% For the Planet Member

We are also a member of 1% for the Planet. Joining the ranks of Patagonia, these are companies that contribute at least one percent of their annual sales to environmental causes. To date, this has totaled $175 million. Through this initiative, Akamai supports like-minded, high-impact nonprofits including the Environmental Working Group and The Surfrider Foundation. Learn more

“Startup Akamai is on a mission to get people to wash less.” — The Guardian